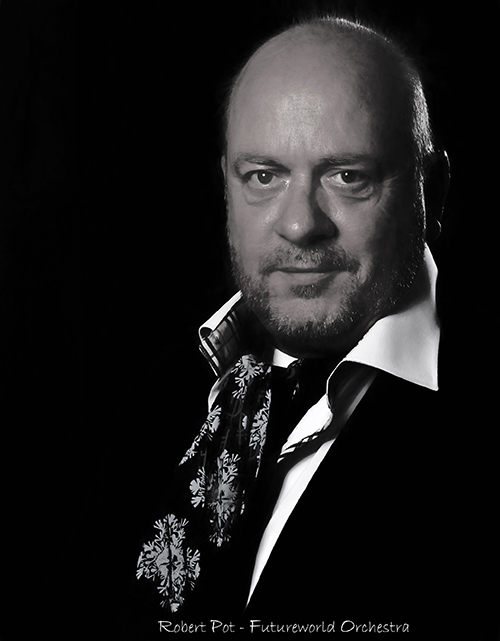 Robert Pot is born in Nijverdal, a quiet village in the country of Holland. Since he was 14 he began to develop a great predilection for symphonic oriented rock music.
Groups like: Genesis, Yes, Emerson, Lake & Palmer, and later on Camel, Asia and UK, became his favorites, in addition to which Tony Banks, Rick Wakeman and Keith Emerson became his greatest inspirers. 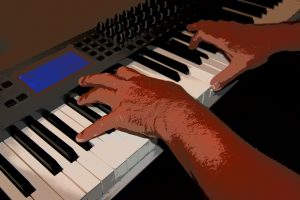 Keyboards is a keyword in Roberts musical life. At the age of 16 Robert bought his first keyboard, an organ build by a neighbor. As a student electronics he soon began to modify the keyboard to develop his own, unique sounds. He realized that synthesizers had a great future and were to create a brand new view on making music. By delivering newspapers and to work as a DJ in local discotheques in his spare time, Robert earned the money he invested in the newest synthesizers and recording equipment. A few years later he had expanded his equipment at a level of a professional recording-studio, where he started to record his first compositions. In 1980 Robert met Gerto Heupink who also worked with synthesizers and recording-equipment and…Future World Orchestra was born. With Future World Orchestra or short FWO, in the period from 1982 to 1985, scored several European hits, like: Desire, I’m not afraid of the Future, Theme from E.T. and Roulette. Also because of the world-wide economic depression in the recording-industry, FWO, unfortunately stopped recording together in 1987, although Robert continued solo with FWO.

Robert, more a studio musician than a live-performer, maintained his effort, to keep writing and recording despite some major setbacks in his personal life. Until now, Robert has developed himself further and now has written many musical works for radio and television productions.
One of Roberts highlights, is his collaboration with Rob and Ferdi Bolland which resulted in the realization of: Darwin – The Evolution, a CD with an international style. Not in the least because of the collaboration with: Colin Blunstone (Zombies, Allan Parson’s Project), Ian Gillan (Deep Purple), (late) Falco (Rock me Amadeus) and Barclay James Harvest and Suzi Quattro.

Besides making music, Robert is a dedicated Instrument Rated Private Pilot. In 2001 he started flight training in Florida (USA) and has accumulated several hundreds of flying hours.

Did you know….. in 2013 Robert escaped a serious accident flying over Ft. Pierce Florida, while performing the “after take-off checklist”, passing 1000 feet, the engine kind of exploded. Landing with 15 knots tail wind he touched down half way the runway, hardly able to come to a full stop in time. Robert eventually was able to clear the runway and parked the plane on the side of the taxiway.

Robert: “Well, to me it was the best flying lesson I’ve ever had!”

The shop is temporary closed and all downloads have evaporated. It's .... "Just a Matter of Time!" Dismiss